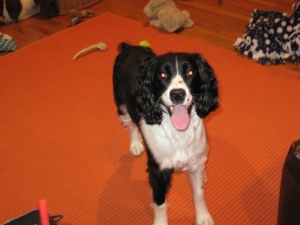 Sadie received a very generous gift in the mail a few weeks ago from Mr.Chewy.com! 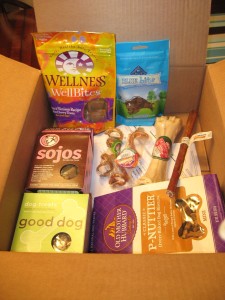 A box loaded with treats & chews!  All her Favorites!

The company contacted me about a month ago to try out their services.  I wanted to give it a few weeks so that Sadie could try all of the products and we could give an honest review.  And, I have to say, we loved our experience with Mr.Chewy! 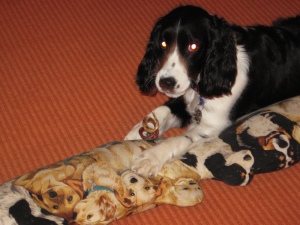 Sadie is an aggressive bone chewer and the bully sticks & flossies were a great alternative to rawhide. 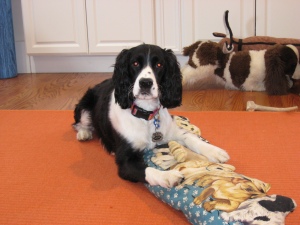 The Merrick bone is holding up really well, too.  She seems to like it just as much, if not better than the antlers!  (And, I just received an email that they sell antlers, too!)

They have a wide selection of both dog & cat products that include treats & food.  They have competitive prices and free shipping on all orders $49+!

The website is very user-friendly, the shipping was fast and everything arrived in one piece.  Always a plus! 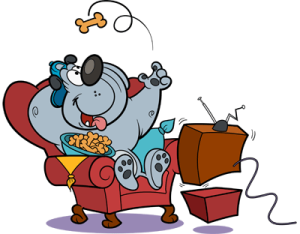 Along with the bone & bully sticks, Sadie received an assortment of treats.  We are back to practicing our training behaviors.

I mixed up the treats and put them into containers, at both doors, to reinforce good behaviors.  It is helping a lot with the come command, we still need to work on greeting guests.  (Sadie will sit for the treat, then tackle the guest!)

The thing that caught my eye about Mr.Chewy is their referral program.  It just sounded really neat to me.

If you use the promotion code below, YOU save 10% off your total order AND MR.Chewy will donate $10 to the pet charity(s) they support.  They currently support 3 great organizations and I left the default set-up for my account; split all donations equally between the 3 charities.

Sadie’s new thing is to jump onto Marcus and force herself between the computer & his lap!

Marcus bought me a new camera for my birthday… crisp, clear photos to be posted soon!  🙂

We had a fun-filled weekend!  I took both Sadie & Gideon on a walk (by myself) Saturday morning.  I was nervous at first, not sure how easy it was going to be with 2 dogs and 2 separate retractable leashes.  I took one quick (and blurry) picture before we left.

The walk was a breeze!  They both walk really well together and it was a great alternative to the busy weekend dog park.

Marcus joined us for 2 more walks over the weekend and they loved the neighborhood strolls! 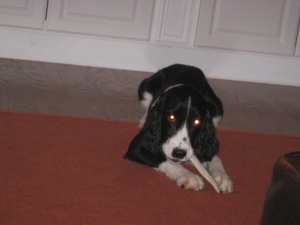 As you may recall, Sadie has an antler chew.  She has really been into chewing it in the afternoon.  I love it because she can chew for a while with little destruction to the antler and then she walks away satisfied.

Gideon found the antler and really liked it… Sadie did not like sharing at all!  She would walk over to him and take it away from him.  It was really funny to watch considering he is 3 times her size!  Gideon really is a gentle giant.  He is so patient and tolerant of her puppy energy and behaviors. 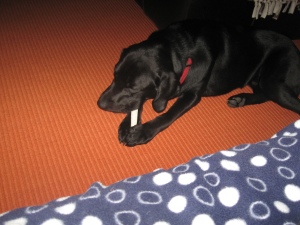 As a reward to Gideon for his kind behavior with our little monster, I went out a bought Gideon his own (larger) antler. 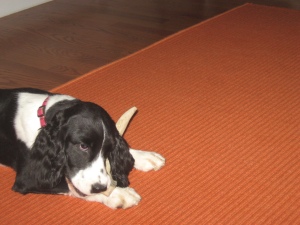 Sadie took it from him!  Oh the nerve of her!

I took it back and made Sadie chew her antler and gave Gideon his back.

They both stood up, exchanged antlers and then laid back down and chewed away!

By Saturday evening, both Gideon & Sadie were “dog-tired”.

Gideon went into his crate to sleep and Sadie assumed her normal snuggle position with Marcus.  🙂

I give both Sadie & Gideon a chewy once a day.  Sadie enjoys her’s on the family room rug. 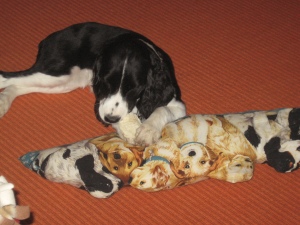 Gideon takes his into his crate.  No sharing with the puppy for this treat! 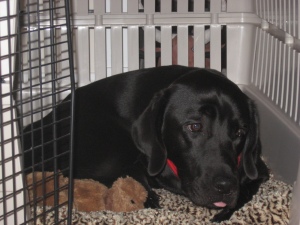 Sunday was another “heat advisory” day… hot and humid and 105.  After our morning walk, we let the pooches cool off in the pool!

Sadie was cautious at first. 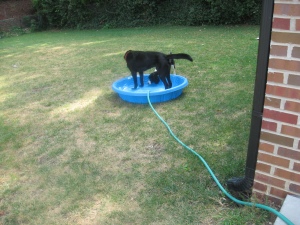 And just like learning to swim, she watched Gideon splash around and then followed his lead.

She really loved the “water fountain”. 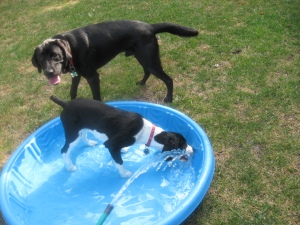 Along with standing, splashing and laying in the pool, the also dropped their tennis balls in and bobbed them out.  It was really entertaining to watch them play.  They both loved the pool!