Gideon & Sadie spent a good amount of yesterday playing in the backyard.  Chase & catching tennis balls were the games of choice.  The temperatures were still very warm, so when I brought them inside to cool down, the playing continued.

Tug is their favorite indoor game.

The toy basket is on the other side of this couch.  They played with EVERY toy Sadie has! 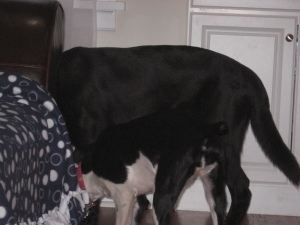 What do you want to play with next?!?

Notice Gideon is standing in this picture…

As the evening went on, Gideon laid down while Sadie continued to play with him.  Puppy energy trumps size.  🙂

There was ‘ruff’ housing, of course. 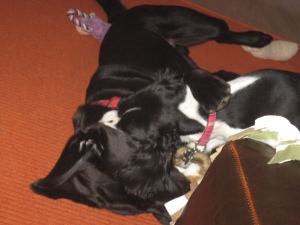 For a while, both dogs laid on their backs, biting a toy between them!  They had me laughing all night. 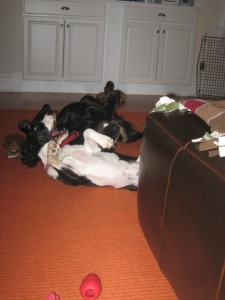 Resting together by the back door.

And, total exhaustion for Gideon. 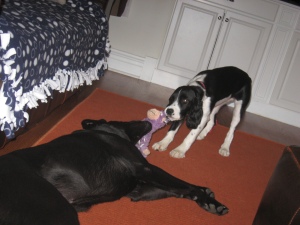 Today, I took both of them to the dog park.  They had fun running with other dogs and then I spent awhile throwing balls for them to chase & bring back.

Currently, both are fast asleep – for now.  😉

Sadie is having a blast this summer!  I need to do a better job taking pictures and making time to blog!  It was much easier to blog with snow & rain!  🙂

I have been “sitting” on these pictures… afraid of the jinx.  Ha!

I bought Sadie a plush Kong dog bed for her upstairs crate because she has been accident free for months.

Sadie likes plush and she also likes pillows for her head… this bed has both.  She loves it!  I also changed her downstairs crate to a thick blanket.  She is also accident free when we leave during the day, but sometimes she chews on her blanket (in a teething way, not destructive) and I’m not confident she wouldn’t destroy a bed just teething.  Lets not forget the last new bed I bought! 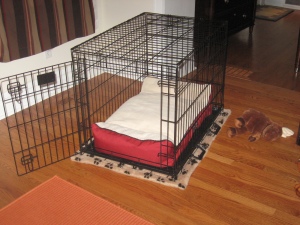 Sadie is loving the summer fruit! 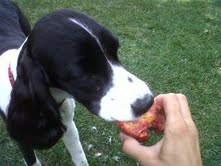 Sadie still loves to play with Dougan’s toys when he drops them over the fence!

I took this picture during a keep-away game when I was trying to get the ball back for Dougan.

I have been taking Sadie to the dog park a few times a week.  We go in the morning, when the weather is not yet in the 100’s! 🙂

Sadie really likes to go and socialize with her new friends. 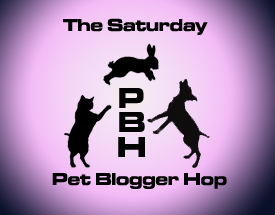 What did you say we are doing tomorrow?!?

Sadie has her spay tomorrow.

I’m a little nervous.  I’ve done this before with Daisy and know it’s a routine surgery, but it’s still surgery.  And, keeping a ‘high energy’ dog calm and quite for days on end to recover is a little challenging.

I bought a cone today at Pet Smart.  We had one for Daisy, and of course, I can’t find it anywhere!  I’m assuming I donated after Daisy died… but I also have a nagging feeling I’ll find it in a month or two!  🙂

I ended up with a traditional cone.  I spent some time looking at the new, soft cones and inflatable donuts.  While comparing items, a Pet Smart worker came over and offered his two cents.  He said they get a lot of returns on the donuts.  He said they are more comfortable, but don’t prevent most dogs from reaching areas at the lower end of their body.  He said Sadie would most likely still be able to lick her incision site.  He also told me I had 60 days to return the cone, even if used.  So, I decided to start with the traditional cone and see how it goes.

Sadie didn’t love trying out the cone.  I decided not to push my luck.  You’ll be seeing photos soon enough.

The Vet called today and went over what to expect tomorrow and what to do tonight.

I need to drop her off between 8 – 9 am tomorrow.  I also need to bring a comfort item for her.  I’m going to bring Ellie, her stuffed elephant.  She sleeps with Ellie and it was her first comfort when we brought her home from the breeder.

They said I can pick her up between 4 – 6 pm.  The surgery will be over in the morning, but they will monitor her all day and keep her on IV fluids and pain medication.

Sadie played a lot today.  We went on our usual neighborhood walk and played in the back yard several times today.  Marcus came home for lunch and she got a bonus session.

I also took Sadie to the dog park for a little socialization.  Sadie was a little overwhelmed by the number of large dogs at the park.  She was good one-on-one, but didn’t really get into the group play. I need to take her to the dog park on a more regular basis after she heals from the surgery.  I think mornings are a little calmer at the dog park, too.  Better puppy play.

She is currently   passed out on the couch next to me.  Here’s hoping a few days of jam packed exercise will roll over for the next few days of recovery! 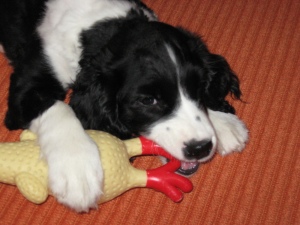 Another couple of days filled with new experiences for Sadie.

We went to the dog park yesterday.  It is the only place you are allowed to let your dog run off leash in the city.  I didn’t take any pictures because it was our first visit and I wanted my full attention on Sadie & the other dogs.  Sadie had a great time.  She socialized well with 4 big dogs and two dogs her size.

I went in the late morning, hoping for just a few dogs.  We started out in the puppy area for Sadie to smell around and get comfortable.  We were the only ones in the puppy area.  After she smelled around and I noticed that the few dogs in the big area seemed fairly calm and friendly, we moved over.  Initial greetings went well.  Sadie does seem more interested in saying hello to parents verses dogs.  🙂  After some hellos, a 15 month old Labradoodle {read huge} tackled her in normal puppy play.  Sadie didn’t love that… she looked at me like, get this guy off me!

The park itself is just ok… it needs to be seeded.  Sadie needed a bath when we got home from all the dirt she played in.  But, I think the socializing will be great for her as she continues to build confidence.  Plus, she slept 8 hours last night!  I love that!

As you know, Sadie is teething.  I was watching TV while she was aggressively chewing this chicken.  She loves the chicken!

Out of the corner of my eye, I saw her chewing with her head in the air… no chicken.  What are you chewing? Pry mouth open, find a chicken toe!  She chewed off the toe and a knob off the head.  Yikes!  I threw out the broken pieces, but as she continued to chew, she just broke off more little pieces.  Sorry Sadie, chicken in the trash.  She was so sad. 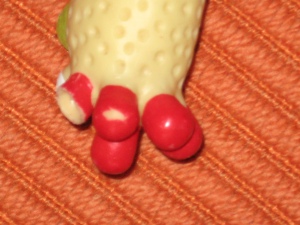 I went looking for her puppy Kong.  It usually rolls under the sofa.  While looking, I found her little rabbit.  It has a squeaker inside and she LOVES it!  I rescued it from under the sofa and she was over the moon!  🙂  So easy to please. 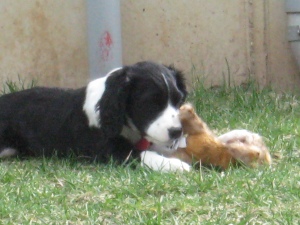 She took the rabbit outside and chewed and squeaked away.  Until a bird started chirping back at her!

Who's making that noise?

Sadie makes me laugh all day long!  What a joy!

We are expecting 90 degree weather this weekend!  🙂  I’m planning some nice walks in Forest Park.  My big worry this weekend is Sunday.  I am running my first half-marathon!  No, I’m not worried about the run.  I’m worried about leaving Sadie!  Marcus will be out-of-town and I will be gone for about 5 hours.  It isn’t too long, but it’s close.  And, I’m a real worry-wort!  I can worry about anything!  🙂  This does make me appreciate all the help I got from family when Daisy was a puppy.  When you move out-of-state, you quickly remember how nice it was to just swing by and drop off the dog for the day!